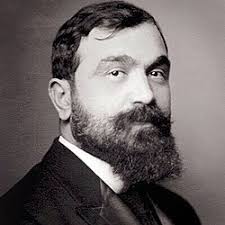 Taken flight and off in exile,
In restraints and held in bondage,
I despair with tears unending
On the banks of Vjosa, Buna.

Where is it that we have left her,
Our poor homeland, wretched nation?
She lies unwashed at the seaside,
She stands unseen in the sunlight,
She sits starving at the table,
She is ignorant midst learning,
Naked, ailing does she languish,
Lame in body and in spirit…

How those rogues have all abused her,
How the beys and mercenaries
And the foreigners oppressed her,
How the usurers have squeezed her,
How they raged at her, destroyed her,
She from all sides has been ravaged,
Heel of force always upon her,
On the banks of Spree and Elbe.

Screaming do I burn in rage,
Bereft of weapons, mutilated,
Neither dead nor living do I
Wait here for some sign or glimmer,
Days and years I tarry, linger,
Weak and out of breath and withered,
Old before my time and broken,
Far from hearth and far from workplace,
On the banks of Rhine and Danube.

Yes, I’m beaten and bewildered,
In a swoon and in convulsions,
On I dream in tears unceasing
On the banks of Spree and Elbe.

And a voice roars from the river,
Booming, from my sleep awakes me,
That the people are now ready,
That the tyrant totters, trembles,
That a storm is rising, raging,
Vjosa swelling, Buna flooding,
Drin and Seman scarlet flowing,
Beys and nobles squirm and quiver,
For beyond the grave life shines and
Trumpets on all sides do echo:
“Rise up, set out now against them,
All you peasants and you workers,
Men from Shkodra down to Vlora,
Crush them now and overcome them!”

This salvation, yes, this war cry,
Has restored my youth and courage,
Strength and hope resuscitating,
On the banks of Spree and Elbe.
That a spring will follow winter,
That we one day will return
Regaining hearths, reclaiming workplace
On the banks of Vjosa, Buna.

Taken flight and off in exile,
In restraints and held in bondage,
I proclaim this fervent hope here
On the banks of Spree and Elbe.

[Anës lumenjve, from the volume Albumi, Boston 1948, translated from the Albanian by Robert Elsie, and first published in English in part in History of Albanian literature, New York 1995, vol. 1, p. 380-381]